There has been a Christian community worshipping in St Lucia’s, formally St Lucy (the patron Saint of eyesight) for over a thousand years.

The church was built in Grinshill stone at a similar time to nearby Haughmond Abbey. The Nave and Chancel date from at least the 12th century with existing pairs of small Norman, possibly Saxon, round arched windows. Archaeologists believe some foundation stones are also Saxon. The 15th century west tower is a "glorious example of Perpendicular architecture.” Three of the original C17th bells remain alongside the very old, rare and precious service bell dating from 1499. The church is also home to a Medieval chest, carved from one piece of oak.

The church was substantially rebuilt and restored by the Gothic Revival architect G.E Street in 1856 including a scheme of internal decoration, much of which was subsequently covered over in the 1950’s. In early 2020, conservationists  Rickerby & Shekede were able to reveal some of this decoration, notably the marouflage roundels in the Nave and decorative work in the Chancel.  Also discovered were fragments of a medieval or post-Reformation painting on the Nave south wall. This work was made possible with from grants from The Pilgrim Trust, William & Jane Morris Trust, William Cadbury Trust, Churches Conservation Trust & the HB Allen Trust.

Outside a substantial, well maintained churchyard provides a habitat for mason bees, areas of wild bluebells and a memorial daffodil bank. It includes several listed tombs and a World War 2 grave. The church is within the conservation area of the village with several other listed buildings alongside.

Following a substantial grant from the National Heritage Lottery Fund in 2018, plus grants from The National Churches Trust,  Shropshire Historic Churches Trust, Garfield Weston, Wolfson Trust, Allchurches Trust and Upton Magna Parish Council, St Lucia’s has recently been removed from the Historic England “at risk register”, following a year of extensive repairs and restoration, plus the installation of a new heating system.

Plans in 2020 for electrical work, redecoration and the installation of a toilet and refreshment area, have had to be put on hold due to Covid 19, as have Heritage activities including a sensory garden, interpretation board in the churchyard, filming and sound recording for the AV monitor in church to go alongside specialised work developed in co-operation with the RNIB. 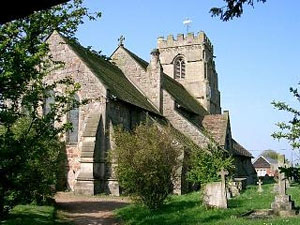